Travel through two decades of Texas history, encompassing the early days of the Republic of Texas, the path to statehood and the founding of Hays County, during the June 14 screening of Edward Burleson: Soldier and Statesman, the newest documentary film by the Hays County Historical Commission (HCHC).
Sponsored by the Heritage Association of San Marcos, the film—and the popcorn—are free of charge. Doors will open at 2 p.m. at the The Marc Theatre, located at 120 E. San Antonio Street (South Side of the Square). The event is part of the Heritage Association’s 40th Anniversary celebration and will kick off the group’s annual membership drive.
Written and directed by Hays County documentary film maker Richard Kidd, and produced by Kate Johnson, chair of the HCHC, Edward Burleson: Soldier and Statesman tells the story of the “hero of thirty battles who was never known to retreat.”

Arriving in Texas in 1830, Burleson fought Indians, challenged the Mexican Army in the Siege of Bexar, led troops at San Jacinto, fought in the Mexican-American War, served as a representative, a senator and Vice-President of the Republic and was elected senator from the 15th District to the First Legislature of the State of Texas.

A contemporary of Stephen F. Austin, Sam Houston, and Jack C. Hays, Burleson helped survey and lay out the cities of Austin and San Marcos. He was the first person buried in the Texas State Cemetery in 1851. 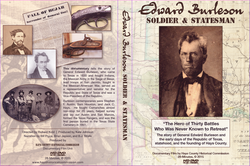 Following the film, guests are invited to the Courthouse lawn for a Sunday Social, where cowboy cobbler will be cooked and served on the grounds from an authentic chuck wagon. The Hays County Museum, located inside the historic Courthouse, will be open as well, courtesy of the HCHC.